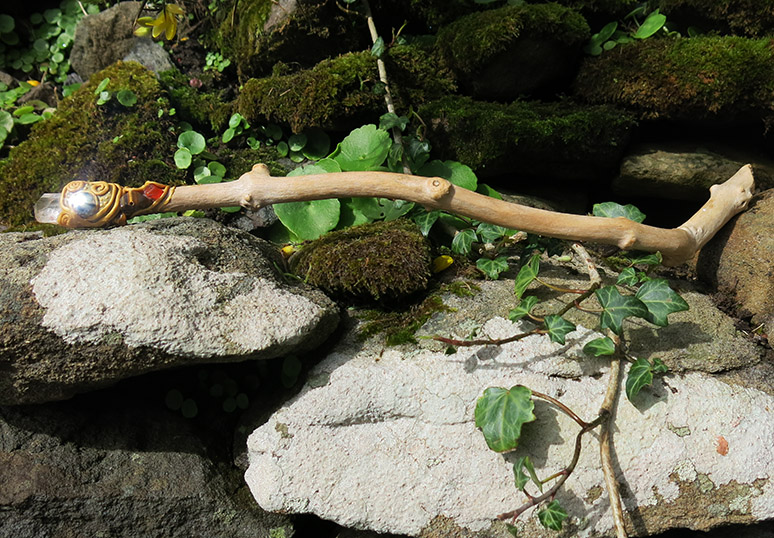 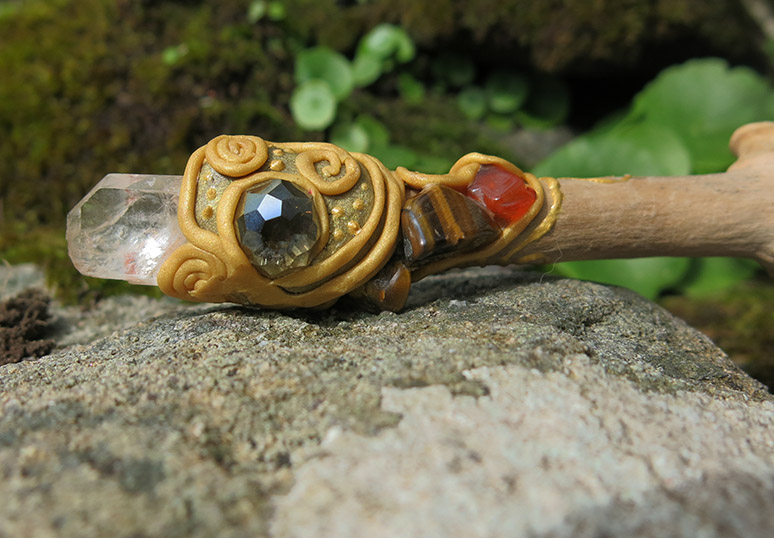 $
62
€ 31.00 EUR
This product is out of stock.
Product is not available in this quantity.
Description
Details
Faq

Handmade drifted Ash Magic Wand, with gemstones and Kerry Quartz. Magic wands were often made of ash because of its straight grain. The Kerry Quartz, also known as Kerry Crystal or Dingle Diamonds, is a very special type of quartz, which purity equals its metaphysical and healing properties.

It s a one of the sacred Druidic three: 'Oak, Ash & Thorn'.The Ash is associated with applications in magic for sea power, ocean rituals, karmic laws, magical potency, healing and health, protection, love, women's mysteries, prophetic dreams, prosperity. The European variety (Fraxinusexcelcior) was referred to in the Eddas as the species of Yggdrasil - the'World-Tree".

The Kerry Quartz, also known as Kerry Crystal or Dingle Diamonds,is a very special type of quartz, which purity equals its metaphysical andhealing properties. Indeed, be it found tumbled by the sea, as clusters or clear pure points, the Kerry Quartz powerfully cleanses all impurities through the different energy bodies, and also provides an invincible protection.Opening the higher Chakras and spiritual awareness, the Kerry Quartz is at the image of the land which created it: wild, beautiful and strong.

Very Powerful as a magical protection, Tiger Eye is a most ancient talisman, mysterious and powerful, revered and feared - an “all-seeing all-knowing eye,” thought to grant a wearer the ability to observe everything, even through closed doors.

Outcropping naturally in secret places in the Western areas of the Dingle Peninsula, Red Jasper is a protecting, nurturing and stimulating stone.  It neutralises many forms of environmental and electromagnetic pollution, brings justice to unfair situations whilst grounding the energies of the problem.

On a cellular level, this all-in-one stone is considered a master healer because it promotes an energetic flow of the highest vibration of love, the spiritual power to heal the world. 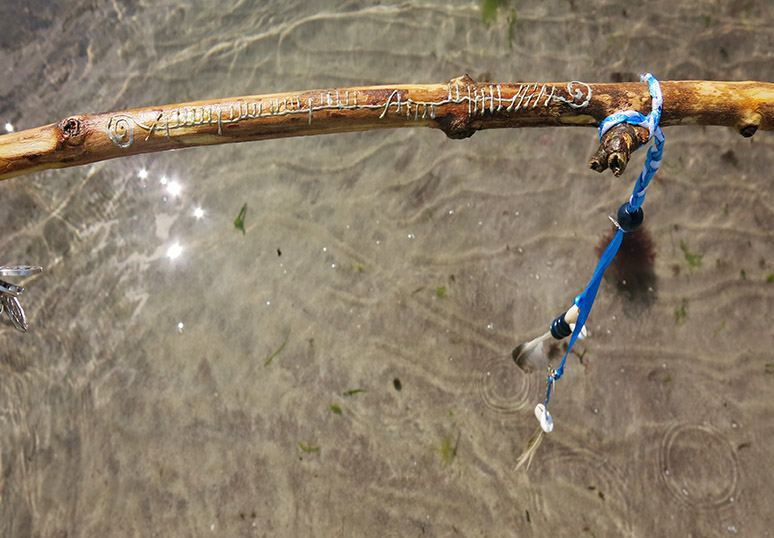 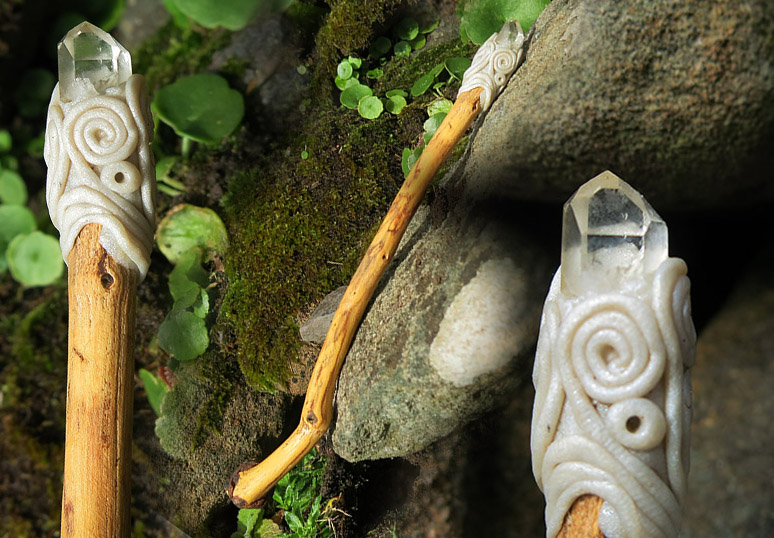 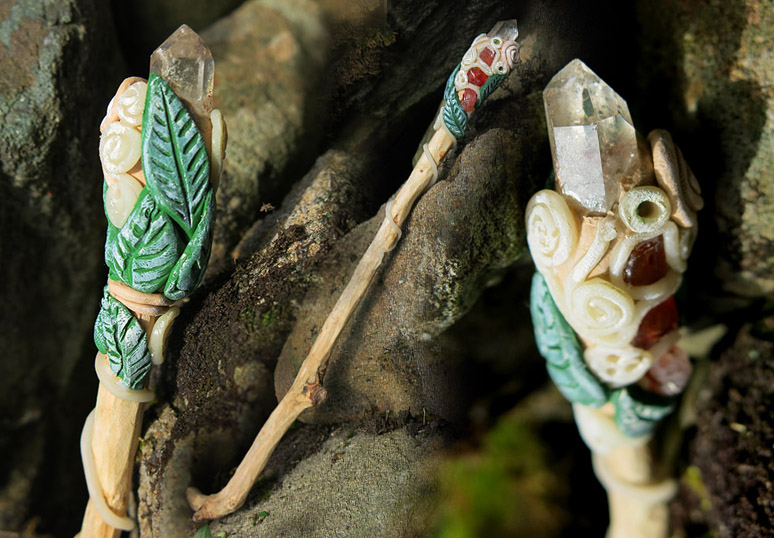 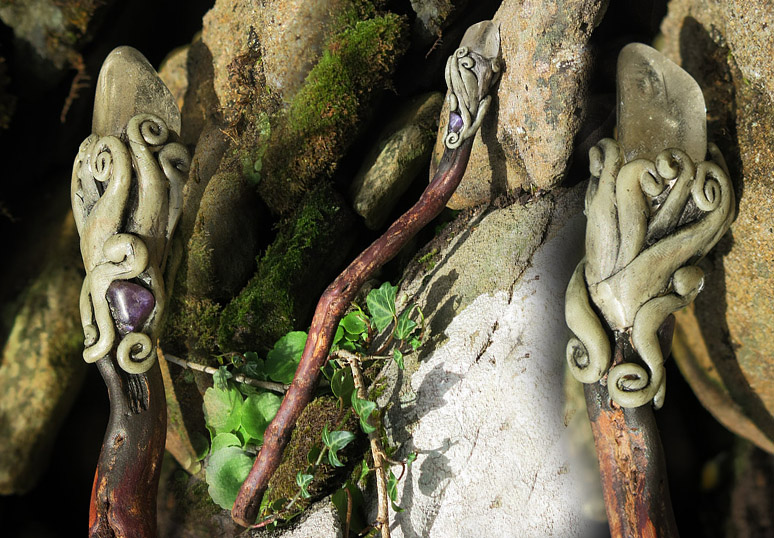 This Magic Wand can be used in spells requiring focus and strength of purpose, and indicates the linking of the inner and outer worlds. The KerryQuartz, also known as Kerry Crystal or Dingle Diamonds, is a very special type of quartz, which purity equals its metaphysical and healing properties. Indeed,be it found tumbled by the sea, as clusters or clear pure points, the Kerry Quartz powerfully cleanses all impurities through the different energy bodies, and also provides an invincible protection. Every material I use in my crafts has been gathered with gratitude and respect, and is a unique piece of this beautiful western edge of Ireland, the Dingle Peninsula in county Kerry. There is magic in all of them.

Ash was commonly used to make spears because of its 'springiness' and straight grain. It can be used in spells requiring focus and strength of purpose, and indicates the linking of the inner and outer worlds. Put fresh ash leaves under your pillow to stimulate psychic dreams.

Tiger Eye was chosen by the Egyptians for the eyes in their deity statues to express divine vision, and was believed to provide the protection of the sun and earth combined,of Ra, the sun god and Geb, god of the growing land. Linked to the magical tiger, the king of beasts in Eastern mythology, Tiger Eye portrayed courage, integrity and right use of power. Roman soldiers carried it to deflect weapons and to be brave in battle. It has been highly regarded throughout history as astone of prosperity and good fortune, protecting one’s resources and reflecting back malice or threats from others. It is a crystal with lovely bands of yellow-golden colour through it. This is a powerful stone that helps youto release fear and anxiety and aids harmony and balance. It stimulates taking action, and helps you to make decisions with discernment and understanding. Traditionally it was carried as an amulet against curses or ill-wishing. It is known to give you courage, self-confidence and strength ofwill.  It enhances creativity and is one of the stones that aid kundalini awakening.

Bringing shadows into light and insights into confused or hard situations,  Red Jasper has a calming effect on the emotions. It also is said to help with dream recall. It is known as the "justice"and "fairness" stone as it is said to decrease injustice and bring positive outcomes to unfair situations. In physical healing, Red Jasper strengthens and detoxifies the circulatory system. Red Jasper carries a strong spiritual grounding vibration, and resonates within the lower three chakras. It creates a strong connection to the Earth. Resonating at the sacral, base and Earth chakras, its actiontakes the energy from the base chakra and grounds it to Mother Gaia.

Turquoise's dazzling blue-green shade made an appearance in ancient Egypt around 6000 BCE where it was incorporated into protective amulets. One of the first gemstones to be mined, the Turquoise was considered a sacred stone by the Ancients, who used it as a powerful healing tool for creating a connection between heaven and Earth.

The soil of the western part of the Dingle Peninsula, in County Kerry, Ireland, is composed in a major part of quartz. The countless crystal caves and veins running through the ground provide material for my crafts, which I always gather reasonably and respectfully.