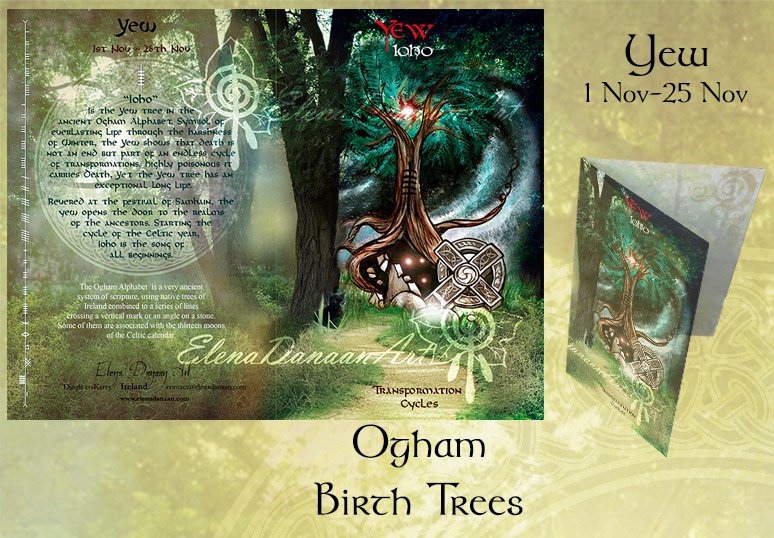 “Ioho” (1st to 28th November) Is the Yew tree in the ancient Ogham Alphabet. Symbol of everlasting life through the harshness of Winter, the Yew shows that death is not an end but part of an endless cycle of transformations. Highly poisonous it carries Death, Yet the Yew tree has an exceptional long life. Revered at the festival of Samhain, the yew opens the door to the realms of the ancestors. Starting the cycle of the Celtic year, Ioho is the song of all beginnings. Find Ned the Irish black cat and follow him into the woods, where hewill lead you to your sacred birth tree…

The Ogham Alphabet is a very ancient system of scripture, using native trees of Ireland combined to a series of lines crossing a vertical mark or an angle on a stone. Some of them are associated with the thirteen moons of the Celtic calendar. Yew was used to enhance magical and psychic abilities & to induce visions. Transformation, reincarnation, eternal life and immortality sum up the attributes of the Yew tree. It has been associated with death, rebirth, change and regeneration. All parts of the tree are poisonous except the fleshy covering of the berry, and its medicinal uses include a recently discovered treatment for cancer. Long associated with magic, death, rebirth and the runes, there are some convincing arguments for it being the original 'World-tree' of Scandinavian mythology. In Europe, yew wood was used for making bows. Yew may be used to enhance magical and psychic abilities, and to induce visions. The Irish used it to make dagger handles, bows and wine barrels. Another important tree to the Winter Solstice and the deities of death and rebirth.