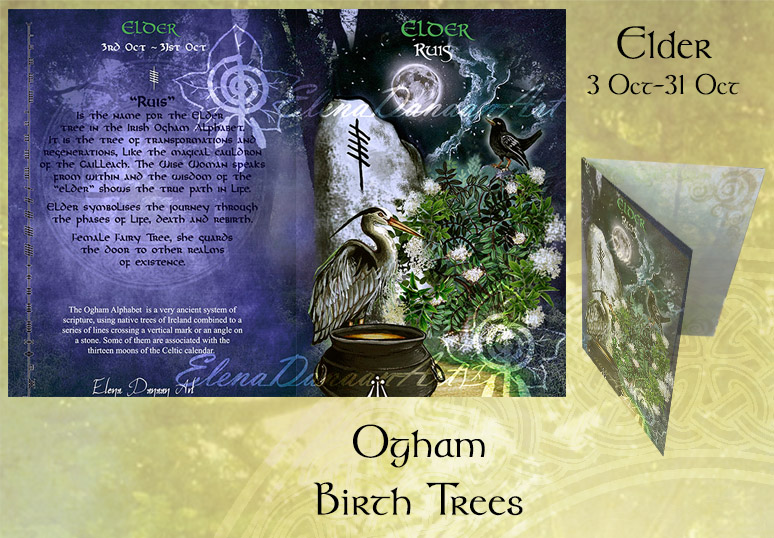 “Ruis”(3rd to 31st October) is the name for the Elder tree in the Irish Ogham Alphabet. It is the tree of transformations and regenerations, like the magical cauldron of the Cailleach. The Wise Woman speaks from within and the wisdom of the “elder” shows the true path in life. Elder symbolises the journey through the phases of life, death and rebirth. Female Fairy Tree, she guards the door to other realms of existence. Find Ned the Irish black cat and follow him into the woods, where he will lead you to your sacred birth tree…

The Ogham Alphabet is a very ancient system of scripture, using native trees of Ireland combined to a series of lines crossing a vertical mark or an angle on a stone. Some of them are associated with the thirteen moons of the Celtic calendar. Also known as Elkhorn, Elderberry, and Lady Elder. The Druids used it to both bless and curse. Sacred to the White Lady and Midsummer Solstice. Standing under an elder tree at Midsummer, like standing in a Fairy Ring of mushrooms, will help you see the "little people." Elder wands can be used to drive out evil spirits or thought forms. Music on panpipes or flutes of elder have the sam power as the wand.  A tea for purifying the blood can be made from the flowers and wine from the fruit, but in general the tree is poisonous. In Norse mythology, the Goddess Freya chose the black elder as her home. In medieval times it was the abode of witches and it was considered dangerous to sleep under its branches or to cut it down. Sticks ofElder were used as magical horses by Witches. Elder indicates the end in the beginning and the beginning in the end. Life in Death and Death in Life.