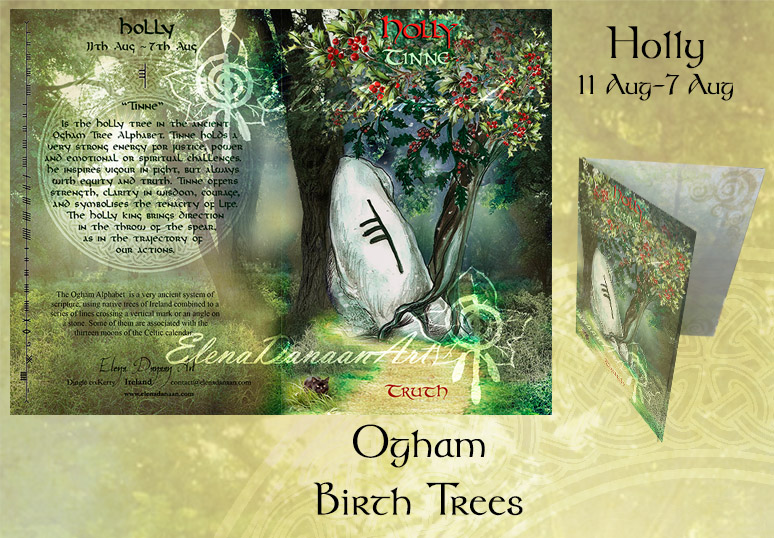 “Tinne” (11th July – 7th August) is the Holly tree in the ancient Ogham Tree Alphabet. Tinne holds a very strong energy for justice, power and emotional or spiritual challenges. He inspires vigour in fight, but always with equity and truth. Tinne offers strength, clarity in wisdom, courage, and symbolises the tenacity of life. The Holly king brings direction in the throw of the spear, as in the trajectory of our actions. Find Ned the Irish black cat and follow him into the woods, where he will lead you to your sacred birth tree…

The Ogham Alphabet is a very ancient system of scripture, using native trees of Ireland combined to a series of lines crossing a vertical mark or an angle on a stone. Some of them are associated with the thirteen moons of the Celtic calendar. Holly is associated with the death and rebirth symbolism of winter in both Pagan and Christian lore. Holly is also associated with magic for protection, prophesy, healing, animals, sex, invulnerability, watchfulness, good luck, holiness and consecration.  I tis also said to have the ability to enhance other forms of magic. In Arthurian legend, Gawain (representing the Oak King of summer) fought the Green Knight, who was armed with a holly club to represent winter. It is one of the three timbers used in the construction of chariot wheel shafts. It was used in spear shafts also. The qualities of a spear shaft are balance and directness, as the spear must be hefted to be thrown the holly indicates directed balance and vigour to fight if the cause is just. Holly may be used in spells having to do with sleep or rest, and to ease the passage of death. A bag of leaves and berries carried by a man is said to increase his ability to attract women.