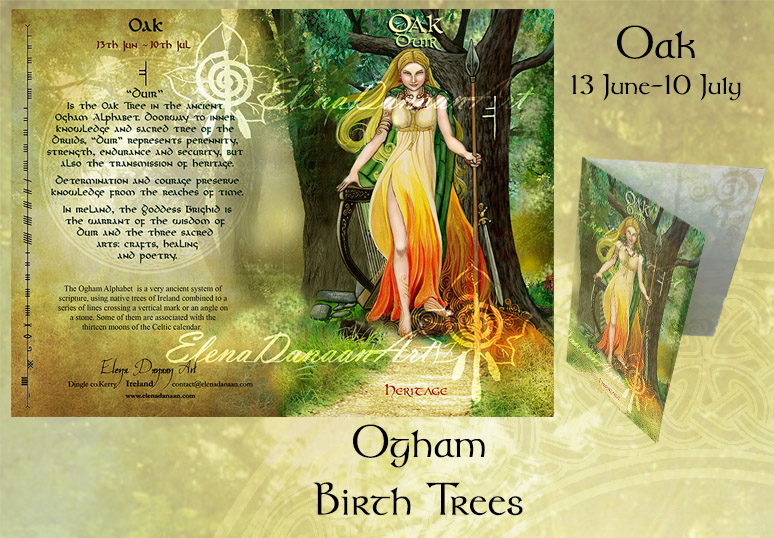 “Duir” (13th June – 10th July) is the Oak Tree in the ancient Ogham Alphabet. Doorway to inner knowledge and sacred tree of the Druids, “Duir” represents perennity, strength, endurance and security, but also the transmission of heritage. Determination and courage preserve knowledge from the reaches of time. In Ireland, the Goddess Brighid is the warrant of the wisdom of Duir and the three sacred arts: crafts, healing and poetry. Find Ned the Irish black cat and follow him into the woods, where he will lead you to your sacred birth tree…

The Ogham Alphabet is a very ancient system of scripture, using native trees of Ireland combined to a series of lines crossing a vertical mark or an angle on a stone. Some of them are associated with the thirteen moons of the Celtic calendar. Oak is one of the sacred Druidic trees, associated with protection, strength, success and stability, healing, fertility, health, money, potency and good luck. Oak has been considered sacred by every culture that has encountered this tree, but it was held in particular esteem by the Norse and Celts because of its size, longevity, and nutritious acorns. The oak is frequently associated with Gods of thunder and lightning such as Zeus, Thor, and the Lithuanian God Perkunas. This association may be due to the oak's habit of being hit by lightning during storms. Specific oak trees have also been associated with the 'Wild Hunt', which is led by Herne in England and by Wodin in Germany. Oak galls, known as Serpent Eggs, were used in magical charms. Acorns gathered at night held the greatest fertility powers. The Druids and Priestesses listened to the rustling oak leaves and the wrens in the trees for divinatory messages. Burning oak leaves purifies the atmosphere. In general, oak can be used in spells for protection, strength, success and stability; the different varieties will lend their own special 'flavour' to the magic.