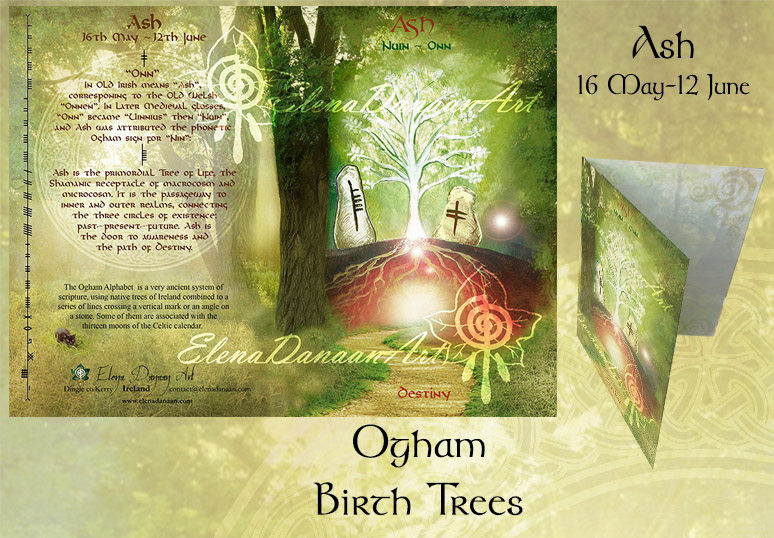 “Onn” (16th May – 12th June) in Old Irish means “Ash”, corresponding to the ancient Welsh “Onnen”. In later Medieval glosses, “Onn” became “Uinnius” then “Nuin”, and Ash was attributed the phonetic Ogham sign for “Nin”.  Ash, as also Oak, is the primordial Tree of life, the Shamanic receptacle of macrocosm and microcosm. It is the passage way to inner and outer realms, connecting the three circles of existence:past-present-future. Ash is the door to awareness and the path of Destiny. Find Ned the Irish black cat and follow him into the woods, where he will lead you to your sacred birth tree…

The Ogham Alphabet is a very ancient system of scripture, using native trees of Ireland combined to a series of lines crossing a vertical mark or an angle on a stone. Some of them are associated with the thirteen moons of the Celtic calendar. Magic wands were often made of ash because of its straight grain. The Ash is one of the sacred Druidic three: 'Oak, Ash & Thorn'. The Ash is associated with applications in magic for sea power, ocean rituals, karmic laws, magical potency, healing and health, protection, love, women's mysteries, prophetic dreams, prosperity. The European variety (Fraxinus excelcior) was referred to in the Eddas as the species of Yggdrasil - the 'World-Tree". Ash was commonly used to make spears because of its 'springiness' and straight grain. It can be used in spells requiring focus and strength of purpose, and indicates the linking of the inner and outer worlds. Put fresh ash leaves under your pillow to stimulate psychic dreams.