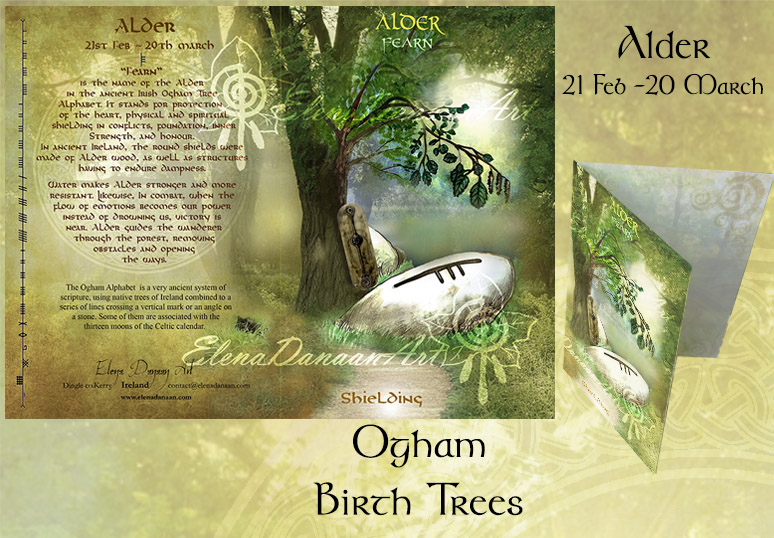 “Fearn” (21stFebruary-20th March) is the name of the Alder in the ancient Irish Ogham Tree Alphabet. It stands for protection of the heart, physical and spiritual shielding in conflicts, foundation, inner strength, and honour. Alder guides the wanderer through the forest, removing obstacles and opening the ways. Find Ned the Irish black cat and follow him into the woods, where he will lead you to your sacred birth tree…

The Ogham Alphabet is a very ancient system of scripture, using native trees of Ireland combined to a series of lines crossing a vertical mark or an angle on a stone. Some of them are associated with the thirteen moons of theCeltic calendar. The alder tree was sacred to the Druids and generally associated with protection and oracular powers. The pith is easily pushed out of green shoots to make whistles. Several shoots bound together by cordage, can be trimmed to the desired length for producing the note you want and used to entice Air elementals. The old superstition of "whistling up the wind" began with this custom. In ancient Ireland, the round shields were made of Alder wood, as well as structures having to endure dampness. Water makes Alder stronger and more resistant. Likewise, in combat, when the flow of emotions becomes our power instead of drowning us, victory is near. The oily water resistant wood has been used extensively for underwater foundations, in dairy vessels and the branches in making whistles. It is used also in the construction of bridges.