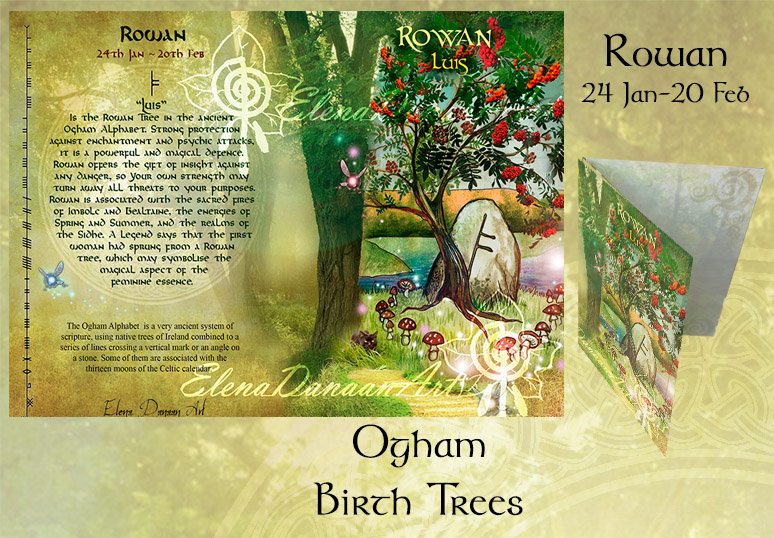 “Luis” in old Irish means Rowan, and is celebrated form the 24h of January to the 20th of February. Strong protection against enchantment and psychic attacks, it is a powerful and magical defence. Rowan offers the gift of insight against any danger, so your own strength may turnaway all threats to your purposes. Rowan is associated with the sacred fires of Imbolc and Bealtaine, the energies of Spring and Summer, and the realms of the Sidhe. Find Ned the Irish black cat and follow him into the woods, where he will lead you to your sacred birth tree…

The Ogham Alphabet is a very ancient system of scripture, using native trees of Ireland combined to a series of lines crossing a vertical mark or an angle on a stone. Some of them are associated with the thirteen moons of the Celtic calendar. The Rowan tree (also called Mountain Ash and 'Witch wood') is long known for aid and protection against enchantment. It is also associated with divination, astral work, strength, protection, initiation and healing, psychic energies, working with spirits ofthe dead, psychic powers, personal power, and success. A legend says that the first woman had sprung from a Rowan tree, which may symbolise the magical aspect of the feminine essence. Sticks of the Rowan were used to carve Runes on. Rowan spays and crosses were placed over cattle in pens and over homes for protection. The berries have a tiny pentagram on them, ancient symbol of protection. The Rowan tree indicates protection and control of the senses from enchantment and beguiling. The Rowan was sacred to the Druids and the Goddess Brighid. It is a very magical tree used for wands, rods, amulets and spells. A forked Rowan branch can help find water or locate metal.