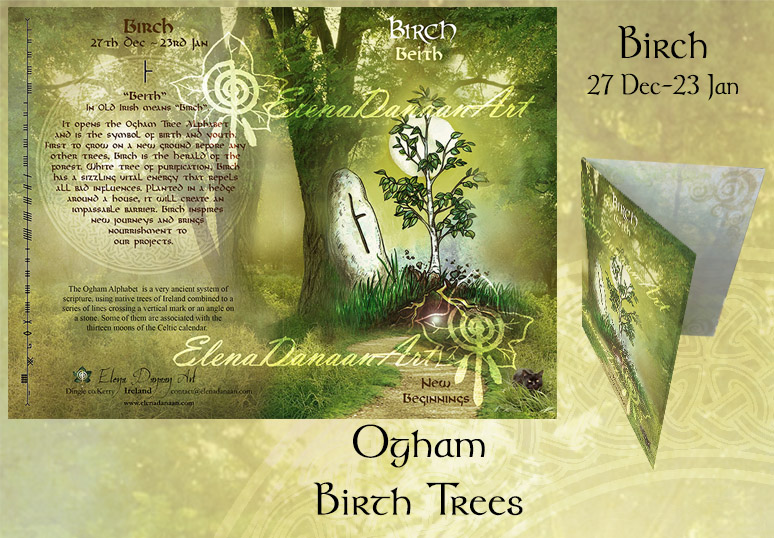 “Beith” in old Irish means Birch, and is celebrated form the 27th of December to the 23rd of January. It opens the Ogham Tree alphabet and is the symbol of birth and youth. First to grow on a new ground before any other tree, Birch is the herald of the forest. White tree of purification, Birch has a sizzling vital energy that repels all bad influences. Birch inspires new journeys and brings nourishment to our projects. Find Ned the Irish black cat and follow him into the woods, where he will lead you to your sacred birth tree…

The Ogham Alphabet is a very ancient system of scripture, using native trees of Ireland combined to a series of lines crossing a vertical mark or an angle on a stone. Some of them are associated with the thirteen moons of the Celtic calendar. Birch has long time been associated with fertility and healing magic, new beginnings, purification, protection, creativity, fertility & birth. It was known as ‘The Lady ofthe Woods’. Birch twigs were used to bestow fertility on cattle and newlyweds, and children's cradles were made from its wood. Planted in a hedge around a house, it will create an impassable barrier. Birch is one of the first trees to grow on bare soil and thus it births the entire forest. Birch is an incredibly useful tree - nearly every part of it is edible, and its sap is a source of sugar. The inner bark provides a pain reliever and the leaves are used to treat arthritis. Its bark was used for everything from paper to boats, and axe handles were also made from Birch.